Author: Jessica Jane Robinson
Release Date: 2018
Series:
Genre: Graphic Novel, High Fantasy, Superhero Fiction
Format: E-book
Pages: 38
Publisher: Resilience Birthright, Inc Presents
Blurb:
On the last day of the existence of her planet, Queen Filoli Vitae, the last of the Evolusarians, is hiding in Mount Altis with her newborn baby daughter only a few hours old, whom she has yet to name. She is levitating in the air holding her child as tears stream from her eyes. With each tear that falls a memory releases; a memory of how her planet and kingdom, Terravitae, fell to destruction with her husband, King Asim. Her life flashes before her eyes, memories of how she became exiled from her home and now in hiding to protect the life of her daughter, the one prophesied to stop the evil force that is destroying her planet and threatens all life within the universe.

Origins of Resilience by Jessica Jane Robinson is a graphic novel about the birth of an environmental superheroine who will take your breath away and turn you into a fan!

This book is beautifully conceptualised, has a sound foundation and an excellent plot (albeit a bit similar to Superhero). I enjoyed reading the storyline because it had a great flow and felt extremely engaging and exciting. The tension was tight and kept the pacing really strung up through the entire book.

The illustrations are excellent, and I loved them. They could have been a little spread out, giving the book a cleaner look. But apart from this, I did not have any complaints at all. The dialogues were good, and the characterisation felt well-developed. I hope this series continues and we get to read more about Terravitae and the prophesied daughter of Queen Filoli Vitae and King Asim.

Author: Drew Palacio
Release Date: 9th May 2022
Series: The Quiet Wants Of Julien J. (Book #1)
Genre: Children’s Fiction, Short Story, Graphic Novel, Poetry
Format: E-book
Pages: 34 pages
Publisher: Brandylane Publishers Inc
Blurb:
JULIEN J’s frustrating evening takes an extraordinary turn when BLUEBULLET, his favorite comic book superhero, pays him a surprise visit.
After a long day filled with school and homework, Julien immerses himself in the latest adventures of Bluebullet, his favorite comic book. His evening reading retreat goes awry when the neighborhood crow starts incessantly cackling. He attempts to drown the noise but finds himself interrupted again. This time it’s by a group of sneezing, buzzing bees. Julien’s exasperation balloons inside him. Determined to finish, he sticks his nose back into his book. His efforts are finally thwarted by additional creatures, now all simultaneously ruining his day.

This unwelcome commotion unfolds while Bluebullet is at a crucial moment in his battle! The cacophony of noises derail his experience and sends him into a fit of rage. Julien screams at the top of his lungs – so loudly, that it summons Bluebullet himself, who swoops down from the sky, ready to help! Julien’s anger would become the catalyst for a profound learning experience. Bluebullet is a wise, seasoned hero who imparts pivotal guidance to Julien. At this moment, Julien learns to maintain his peace of mind even when confronted with adversity.

Shrieks And Sounds And Things Around! by Drew Palacio is the first book in the new children’s graphic novel series, The Quiet Wants of Julien J.

This book is tremendously engaging and I enjoyed reading it a lot. The illustrations are beautiful and captivating and the writing is really impressive. The book has a big moral to share with its readers in the end and that makes this book all the more precious. The poetry in the book has a great flow and will be easily understandable by children.

I would highly recommend it to all middle graders and early teens and to parents who read books to their children. This book has such a beautiful message for everyone that you wouldn’t want to miss out on it. 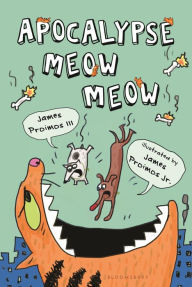 Brownie, Apollo, and their ragtag group of strays have raided the grocery store and defeated some very mean mutts–but now they’ve run out of food. So when the crew discovers a nearby Twonkies factory, and all the Twonkies they could ever eat, they think they’ve got it made.

The only catch is the cat guarding the factory–and this “cat” is MUCH bigger, and far more sophisticated, than any feline they’ve ever met. Can the dogs and their friends defeat their foe and claim the Twonkies for themselves?

The Proimos father-son team returns with another irreverent, dog-filled take on the apocalypse, told in a graphic novel paper-over-board format. The instantly accessible artwork and laughs on each page will charm everyone from the most reluctant reader to the coolest of cats (humans and animals alike)!

I had a good laugh reading this comic and would definitely read the other books in the same series.

The book started brilliantly and I adored all the dogs and the cat (meow.) I really enjoyed the quirkiness and the cuteness of the plot and the characters. I absolutely loved the whole thing about the “Twonkies” (with a capital T) and the nude dude.

It’s a funny book and that’s what I was expecting from it, so it delivered what it promised and considering that it’s a children’s book, I can’t expect anything more from it.

Having said that, i did feel that the end could have been a little different or a page sooner.
Originally I wanted to give this one a 5-star rating, but before I did I found out that the other books in this comic-series are far funnier than this one, so I thought of giving it a 4-star for now. If later, after reading the other books, I’ll feel that it deserves an added star or half, then I’ll definitely update my review. But for now I think 4-star rating is perfect.