Edition: E-book
Pages: 48
Publisher: WordBuzz Publishing
Blurb:
Snow-capped mountains and peaks that appear precarious to folks who prefer the solid comfort of level-ground, are like home to me!
I am Siddharth. My parents would have probably been okay had I turned to the forests seeking nirvana like the Buddha. But I have turned to the mountains to seek solace; or adventure, depending on how you look at it. The mountains are my home. They are my paradise.
My parents wanted me to leave my adventures, marry a girl, and ‘settle down’. I’m not sure what that means, but I understand their love. So I obliged them by getting engaged to a girl of their choice, but fate had other plans for me. During my mission to climb Everest, I fell in love–with my Sherpani, the woman who was my guide on the treacherous climb. Fate, however, is not satisfied playing games with me. It wants me to deal with more. Much more!
I don’t know if I will ever climb Everest. I don’t know if I will ever win my Sherpani. But I know that I MUST. Even though life has taken a drastic and unimaginable turn…

I have read tons of romance novels and found most of them somewhat the same – tons of cliches, unnecessarily cheesy and cringe-worthy scenes and senseless decisions. But this book is nothing like them. This book is a refreshing new take which fits the bill of sensible romance novel perfectly well.

The book started out slow but picked up in time and took me sailing through a journey that was equal parts emotional and entertaining. This book explores romance very differently. We get to see sacrifice as one of the themes that is generally overlooked by contemporary writers. The author did a pretty good job with the themes of the book and created what I would personally recommend to my friends and family.

It is a very quick read and the writing was good too. I liked the ending as it wasn’t very predictable, though it made a lot of sense so overall I was very happy that I read this book.

I’d recommend this book to all romance readers as well as those who like to read dramas and are okay with emotional themes. 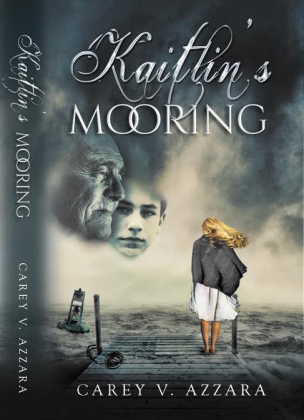 Edition: E-book
Pages: 208
Publisher: Glass Spider Publishing
Blurb:
Nothing is more horrific than losing a child, nothing more joyous than the birth of one. When grief intertwines with joy, it throws the Deveau family into turmoil.

Pregnant twenty-year-old Kaitlin Deveau leaves Boston University in a hurry when Henry, her grandfather, calls from Maine with devastating news. Bereft of hope, Kaitlin’s son, Christopher, becomes a life preserver, keeping the family buoyant. Henry, now Chris’s only male role model, teaches him lessons he uses throughout life. In the end, Chris and his adopted sister, Susan, must save their parents from the fate that took his grandparents–but the outcome is uncertain.

Kaitlin’s Mooring by Carey V. Azzara is a beautiful story about relationships and family.

This book was surprisingly good and I savoured reading every minute of it. The overall story was a feast and the writing was pretty good and the characters strong and believable. The character’s inner conflicts seemed real and they complemented the carefully woven tale very well. The beginning was slow but built up steadily and the ending proved to be apt.

Except for a few minor pacing issues, I enjoyed the book thoroughly. I’d recommend it to all contemporary fiction readers and to those readers who want to explore new authors and books.

this review is also posted on Goodreads and Amazon 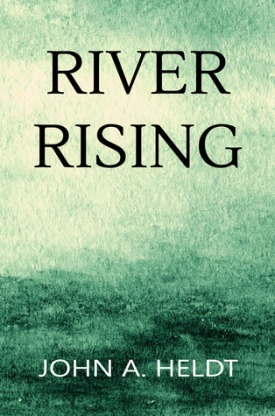 Author: John A. Heldt
Release Date: 7th February 2017
Genre: Science-Fiction, Romance, Historical
Series: Carson Chronicles
Edition: e-book
Pages: 661
Publisher:
Blurb:
Weeks after his parents disappear on a hike, engineer Adam Carson, 27, searches for answers. Then he discovers a secret web site and learns his mom and dad are time travelers stuck in the past. Armed with the information he needs to find them, Adam convinces his younger siblings to join him on a rescue mission to the 1880s.
While Greg, the adventurous middle brother, follows leads in the Wild West, Adam, journalist Natalie, and high school seniors Cody and Caitlin do the same in Johnstown, Pennsylvania. Like the residents of the bustling steel community, all are unaware of a flood that will destroy the city on May 31, 1889.
In RIVER RISING, the first novel in the Carson Chronicles series, five young adults find love, danger, and adventure as they experience America in the age of bustle dresses, gunslingers, and robber barons.

River Rising by John A. Heldt is an engaging sci-fi historical book that’ll take you on an emotional rollercoaster ride.

I’ve always loved author Heldt’s books because of the beautiful storylines and his exceptional storytelling skills, and this book is no different and had the same charm that I find nothing short of magic. In fact, this book was all this and so much more; it had elements of mystery and something very different from the author’s previous books – this book is a series based around the same family. This made me look at the characters, the main ones as well as the secondary ones, in a very different light.

Overall it was a very good read and I enjoyed every aspect of it. I’d recommend it to anyone who enjoys historical fiction, science-fiction – time travel, simple romance, family drama and easy mystery.

2115 London
The city is overrun by organ traders in truck size hearses trawling the streets in the aftermath of the Hemo plague. Writer James Nolte meets Laila an X1 cyborg sent to scan humans for signs of Hemo.
Modern Day New York City
Internal Affairs agent John Azolo connects the dots from an unfinished manuscript to unravel a mystery surrounding his friend’s suicide. Detective Laila Carter, whom John audits, might just hold the key to both stories.

The Man You Scripted by Calvin Honors is a Psychological Dystopian Drama based on a remarkably unique futuristic concept.

The fast paced book offers a lot for the genre lovers. It explores a unique writing style of combining two parallel, seemingly unrelated stories and then bringing them together to a great climax. The characterization was god and all the characters were relatable.

The writing style had a nice flow and made this book an easy and quick read.

I enjoyed reading this book and would recommend it to al the Dystopian and Speculative fiction buffs. This is one book you wouldn’t want to miss.

Vlad Tepes (Luke Evans) is a great hero, but when he learns the Sultan is preparing for battle and needs to form an army of 1,000 boys, including Vlad’s son, he vows to find a way to protect his family.

Vlad turns to dark forces in order to get the power to destroy his enemies and agrees to go from hero to monster as he’s turned into the mythological bloodsucker Dracula.

Based on characters by Bram Stoker.

I’ve always been fascinated by Darcula, though I’ve never read about him but I’ve always been curious to know about his life. I’ve always thought of Dracula as a very negative character due to the frequent negative portrayal of him. I’ve always considered him a bloodsucking killing machine, but after watching this movie I felt a strong need to kick myself! I never thought that Dracula can be interpreted in such a glorious and honourable way. He is shown as a caring and protective father who’ll go to any lengths to save his family and empire from the rude and egoistic Turks. After watching Dracula Untold I’ve undoubtedly turned into Dracula’s sincere fan. To be honestly he has successfully hit the top note when it comes to my “Favourite Vampires list”. I can say, without a single speck of doubt, that Vlad is the best vampire that has ever walked on the face of the Earth.

The bats are shown pretty amazingly, specially the bat-effects whenever Vlad took a flight or ran super-fast. Dominic Cooper played the part well, though I thought there should have a bit more action! I was left craving for some one on one bad-ass and gory fight between Vlad and Sultan. There could have been a lot of action in the last 15 minutes but unfortunately the fights were child-like!

Other than the awesomeballs character of Vlad, I really really liked Master Vampire. He scared the hell out of me and I really freaked out at his close-up. He looked every bit like the name suggests and I was actually hoping for the villain to be as scary and dangerous as Master Vampire, as disappointing as it is, that was really not the case.

Vlad looked dangerously scary when, near the end, he bites Dominic Cooper. The effects are awesome and the costumes were up-to the mark. Sarah Gadon’s performance really didn’t stand out. In my opinion, some other heroine might have played the part better! 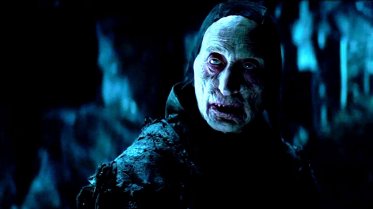 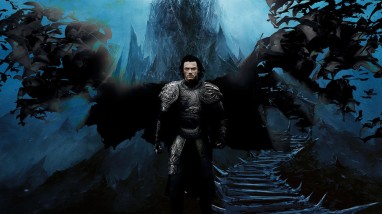 What do you feel about Dracula Untold? Feel free to share your views 🙂