For millennia, the Amazons of Paradise Island have created a thriving society away from the blight of man. One resident, however, is not satisfied with this secluded life — Diana, Princess of the Amazons, knows there is more in this world and wants to explore, only to be frustrated by her protective mother, Hippolyta. Diana finds her escape when Air Force pilot, Steve Trevor, the first man she has ever seen, crashes onto their shores. With his life hanging in the balance, Diana ventures into the long-forbidden world of men. The Amazons chase after her and bring her back to Paradise Island in chains to face trial for breaking their oldest law — staying separated from the world that wronged them.

I’m new to the Wonder Woman Universe and wanted to start with this book as it is the first in the series and starts with the origin story.As a newbie to the Winder Woman comics, I don’t have any basis to compare the story told in this graphic novel, but I do know a few elements and as far as I am concerned, this book is really impressive.

As a graphic novel enthusiast, I enjoyed the bright colors schemes and the bold and extravagant characterization. The Wonder Woman comes out asa real superhero in her full glory on each and every single page.

Though I was expecting the Amazons of Paradise Island to be simple and elegant beauties, I had no idea (that is till I read this book) that they were this amazing bunch of sexy and hot islanders. I loved this interpretation of the Paradise Island, in fact, I found it quite enterataining. But the whole lesbian spin made me wonder a lot about stuff I really didn’t want to think about.

Still, I really enjoyed reading this graphic novel and I’ll definitely read all the parts to come in this series. 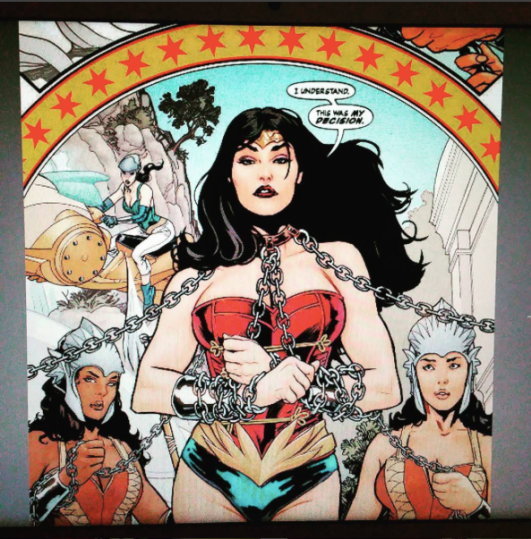 You can also read this review at Goodreads and NetGalley.