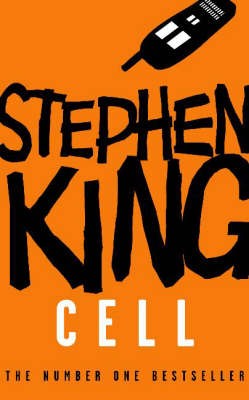 Civilization slipped into it’s second dark age on an unsurprising track of blood, but with a speed that could not have been foreseen by even the most pessimistic futurist…and the world as it had been was a memory.

The event became known as The Pulse. The virus was carried by every cellular phone operating in the world. Within hours, those receiving calls would be infected.

It’s the best book I’ve read after A Song Of Ice And Fire! The characterization and the narration is incredibly amazing. It catches the reader’s interest from the first line to the very last word. Yes!

The story starts minutes before The Pulse occurred and takes us through the entire scenario in perfect detail. You’ll get a feeling that you are right next to the lead, Clayton Riddell and are experiencing each and everything. The craziers or the phone-crazies are easy to picture and seem scary. Clay’s allies, Tom and Alice are perfect and the way they survive is really intriguing. The major part of the book is about Clay’s journey to save his son and that he does! Or not! Well, the best part (as far as I’m concerned) is the open-ending, which is a treat for reader’s imagination.

One of the other things I liked about Cell is that The Pulse, that is the virus, which is also referred to as a programme, is shown to be corrupted and wormed. Which actually takes the entire concept to a whole new level.

This book is amazing. I love it and I guess now I’ll be on a Stephen-King-reading-spree… It very well satisfied my hunger of always wanting more from any post-apocalyptic (specially Zombie) movie. From now on, I’m gonna switch to apocalyptic books instead of movies cause in movies you just get to watch stuff but in a book, specially by King you really get to feel the intensity.

Throughout the entire book and it’s events, I was right there with Clay and the gang and I’ll tell you what, I was so involved in the happenings of the book that yes, I did hesitate to pick up my cell when it rang!

It’s not a book it’s an experience and I really can’t have enough of it!

Opening Line: ‘The event that came to be known as The Pulse began at 3:03 p.m., eastern standard time, on the afternoon of October 1.’

“This is how a man looks when he’s deciding that the risk of death is better than the risk of change.”

‘The event that came to be known as The Pulse began at 3:03 p.m., eastern standard time, on the afternoon of October 1. The term was a misnomer, of course, but within ten hours of the event, most of the scientists capable of pointing this out were either dead or insane. The name hardly mattered, in any case. What mattered was the effect.’

Final Thoughts: A must read.