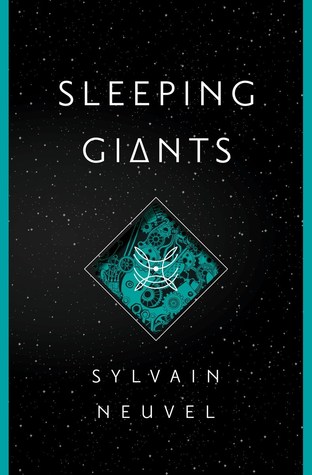 World War Z meets The Martian. This inventive first novel will please devoted fans of sci-fi as well as literary readers hoping a smart thriller will sneak up on them.

17 years ago: A girl in South Dakota falls through the earth, then wakes up dozens of feet below ground on the palm of what seems to be a giant metal hand. Today: She is a top-level physicist leading a team of people to understand exactly what that hand is, where it came from, and what it portends for humanity. A swift and spellbinding tale told almost exclusively through transcriptions of interviews conducted by a mysterious and unnamed character, this is a unique debut that describes a hunt for truth, power, and giant body parts.

This book is a MASTERPIECE. I mean I don’t even know where to start and what to say about this book…

*Sigh* Let’s begin here… At first I had only a faint idea of what this book would be like, but trust me, it wasn’t even 1% of what it turned out to be (in a good way.) It totally BLEW my mind OFF!!!

First off the format is super intriguing and very, very clever. The transcripts, interviews, personal entries, a few random conversations, newspaper articles etc, were not only intelligently constructed but also mixed deftly in what can only be called a really, really impressive combination. The sequencing was brilliant and made this book an epic read. Hats off to the author for pulling this off with such perfection.

I can’t even begin to express how impressed I am with this book’s format and writing. I mean, as an author myself, I can understand how difficult it would have been and for that alone, kudos to the author.

Coming to the story, I was expecting it to be something different. But saying that I was surprised by the direction the plot took in the second half would be an understatement. I mean it was a whole lot different from what I could have expected. The story itself is an outstanding piece of work in itself.

If it’s not obvious already, then let me state it clearly. I LOVE THIS BOOK! I mean really love it. It’s a really, really intelligent book with a very strong plotline and astounding characterization.

The end of this book completely caught me off guard. So yeah, it was good through and through.

In the end, I’d just like to say one thing: If you want to read only 1 book this year, make sure Sleeping Giants is the ONE.

And I just found out (while writing this review) that this book is the 1st book in series, Themis Files. So, now I’m eagerly waiting for the second part… Hope it comes out soon!

Opening Line: It was my eleventh birthday.

If you fall in love with someone, there’s a good chance the person won’t love you back. Hatred, though, is usually mutual. If you despise someone, it’s pretty much a given they’re also not your biggest fan.

There I was, this tiny little thing at the bottom of the hole, lying on my back in the palm of a giant metal hand.

Final Thoughts: If you want to read only 1 book this year, make sure Sleeping Giants is the ONE.