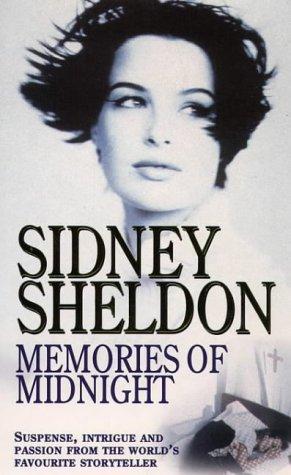 In THE OTHER SIDE OF MIDNIGHT, they played the ultimate game of love, lust, and death.
Now, in MEMORIES OF MIDNIGHT, the survivors meet to play one last time…
Shadowed by tragedy and burdened by amnesia, a beautiful woman desperately tries to return to reality. She is Catherine Douglas, destined to once again challenge the cruel, charismatic power of Constantin Demiris, the Greek shipping tycoon who murdered Catherine’s husband. Now, in the glittering capitals and carefree playgrounds of post-war Europe, Demiris sets his deadly sights on Catherine — and the single, treacherous secret whose shattering truth is known to her alone…

Memories is a brilliant novel that keeps the juices of one’s mind flowing. It’s an ultimate page-turner. I love Sidney Sheldon’s books but this one is one of his best books. No matter how old the books are, or infact how many times you read them, they really keep you engaged!

This book is the sequel to The Other Side Of Midnight and rotates about Catherine (Larry Douglas’s wife). At the end of the first book she lost her memory and in this book, around a year later, she starts to regain it bit by bit. This poses a threat to Constantin Demiris and he decided to take one last revenge with Larry Douglas (even though he’s dead), by sexually exploiting his wife and then killing her. He waits for the right moment for this but other loose ends, regarding Noel’s and Larry’s cold-blooded murder by Costa, starts to come up and he gets busy planning quite a few murders.

Some new characters are also introduced and they play a major role in the downfall of Costa. This book familiarises the reader with the life of our beloved Constantin Demiris (past and present) and how he pays for all he does.

Catherine meanwhile remains the main focus of the book and also the Costa’s target. After The death of Kirk Reynold’s (a co-worker whom she dates) in an skiing accident and two lawyer’s random deaths (involved in Larry’s trial) , she starts to feel that everyone around her die’s and goes in depression. Then she visits a psychiatrist named Alan, who actually plays a small part of our hero.

The end is predictable but the way it is written is just amazing. You’ll definitely not be able to leave the book even for a second in the last 50 pages! Atleast I wasn’t able to. The end of Costa was quite unimaginable!

I would definitely recommend it to everyone who hasn’t already read it, especially to those who love thriller and mystery.

Opening Line: ‘It must look like an accident. Can you arrange that?’

Memorable Quotes: ‘He believed nothing he was told and trusted no one.’

“Constantin Demiris had arranged with the authorities for her body to be buried on the grounds of the cemetery on Psara, his private island in the Aegean. Everyone had remarked on what a beautiful, sentimental gesture it was. In fact, Demiris had arranged for the burial plot to be there so that he could have the exquisite pleasure of walking over the bitch’s grave.”