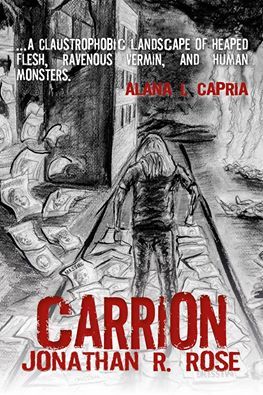 Carrion is about a world consumed by chaos. But in this world, you are not a desperate survivor hoping to outlast the bedlam; instead, you are the monster that caused it. Consumed by an insatiable hunger, a malevolent need to feed, you are the one from whom the masses flee. And because of you a group of barbaric men led by a fanatic with a gleaming badge fastened to his chest have banded together with the intention of hunting you and all those like you down. Follow in the footsteps of a fiend. See what he sees. Taste the flesh. Smell the decay. Suffer the anguish. Witness a massive city crumble under the weight of fear and hate and become hell. Whether engulfed in flames, or flooded by lakes of blood, all that remains are monsters and men, and the war that wages not only between them, but within themselves.

I hate saying this but I have to leave this book alone for good as the it’s really failing to keep up with the expectations I had before starting with it.

The writing is really good but the plot seems a little off and the whole monster’s journey is really starting to make me feel sick. I usually have a good appetite for blood and gore but here it’s starting to feel quite forced and unnecessary, I mean yes, the monster is going to rip out the flesh off the bones and suck the bones dry, he is a Zombie after all.

There are a lot of raving reviews for this book, but it’s not what I expected, so it’s a DNF for me. If you are really into zombies and the undead and are totally into blood-spilling and gory writing, then this book is for you. But it would do you good to keep in mind that this book has nothing more to offer.