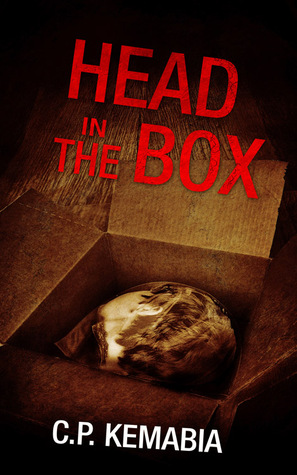 Charlie and her roommates along with their friends could have never imagined that, after the birthday party of the night before, their morning would take a twisted turn with a macabre discovery: a box containing the head of a stranger.
Because of their different personalities and also because of another unfortunate event, they can’t decide on the right way to deal with it.
Their disagreement ultimately triggers heated arguments and unsuspected passions. And as the story unfolds, the strain of their situation will take their relationship with one another to the very edge.
Yet most shocking will be the answer to the main question that is on everyone’s mind: who is the man whose head ended up in the box and… who brought the box into their apartment?

This book started out pretty good and the mystery involved was also nice, but by the time I neared the end I started to wonder what was the point of the entire thing. I mean I get that this is more like a novella, a very quick read, but still, what was the point of it all. If you have 7 people in a story then the suspect is all too clear, because apparently everyone has read Agatha Christie’s books and, hence, everyone knows that it won’t be the guy the author clearly tries to show as the suspect. We’ve all been there where the butler or the maid turns out to be the suspect- the person who appears only twice or thrice in the entire story. So, in spite of having a good plot, I seriously thought that the story lacked when it came to execution.

One of the positives about the book is that it is a real quick read. So, if you want to try it, it won’t take long. And as you can see from my rating, it is a bearable read (if you don’t read a lot of mysteries.) But if you do then you might find it a little odd.
The characterization in this book is surprisingly good and I’ve given 3 stars for that matter alone.

Opening Line: On the morning of October 22nd, 2011, something terribly shocking happened.

You can also read this review at Goodreads, NetGalley and Amazon.

Listen to this straight-from-the-shoulder episode of my podcast, Coffee Conversations with Author Heena, where I talk to author E.T. McNamara, an accomplished historical romance writer, who has an extremely varied background including being a police supervisor, a criminal investigator, a SWAT team member, a supervising court clerk, and the court official in charge of New York City’s night courts. He has also served as a United States Marine Corps reservist, a district assistant manager for a major insurance company, and a NASDAQ registered representative.Author McNamara began his writing career after retiring from years of serving in the public sector. He attended St. John’s University and Rollins College, attaining his degree in economics and doing post-graduate work in financial management. He enjoys creating a believable story and developing characters with whom his readers can identify. He believes that if the readers feel better after reading the story than before, he will have achieved his objective.His other interests include landscape photography, where he has received national recognition for his work. BONUS: Author McNamara believes that all the positions that he had worked in have provided him with real-life experiences to incorporate into his novels. You can connect with author McNamara on his Website, Amazon and GoodreadsYou can find his historical romance novel Fate&apos;s Final Destiny: A Novel of Love, Betrayal, Heroism, and Devotion here: Amazon, Goodreads and The Reading BudAnd his book Puzzle Pieces here: Amazon and Goodreads__________________________________________________________________________________________For more, you can follow me on Instagram at @CrazyCatWriter, find out more about me, my books and my EDITING SERVICES at my author website: www.heenarathorep.com Or follow my bookish journey of reading more than 100 books every year at my Book Blog: The Reading Bud.You can also subscribe to my YouTube Channel or follow me on TwitterFollow me on: Instagram: @CrazyCatWriter Author Website: www.heenarathorep.com Book Blog: The Reading Bud YouTube Channel: @Crazy Cat Writer Twitter: @CrazyCatWriter Facebook: @CrazyCatWriter
Loading Comments...
%d bloggers like this: