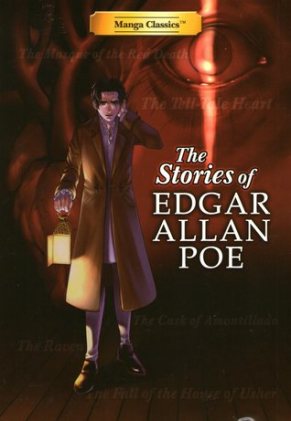 Edition: PDF
Pages: 308
Publisher: Udon Entertainment
Blurb:
The Tales of Edgar Allan Poe is a brilliant collection of some of his best-known stories: The Tell Tale Heart (a murder s haunting guilt), The Cask of Amontillado (a story of brilliant revenge), and The Fall of the House of Usher (an ancient house full of very dark secrets). Also included in this collection are The Mask of the Red Death (horrors of ‘the Plague’), and the most famous of all his poems: The Raven (a lover s decline into madness). Best read in a dimly-lit room with the curtains drawn, Poe s brilliant works come to life in darkly thrilling ways in this Manga Classic adaptation.”

The Stories Of Edgar Allen Poe is another adaptation by Stacy King, who has adapted several other Manga Classics including Sense And Sensibility. This was my first encounter with any of Edgar Allen Poe’s works, and to say that the stories creeped me out would be an understatement considering that I write horror and creep-worthy fiction myself.

To be honest, this book did not please me like some of the other Manga Classics did; maybe it was because I wasn’t able to connect with Poe’s writing, or maybe because there were only a couple of stories. Either way, I didn’t like this book enough to get and read other works by Mr Poe because having previously read Stacy King’s other adaptations, I know that that it wasn’t because of her or the illustrations, which were beautifully done, to say the least.

If you’re anything like me and dread reading most fo the classics, then go ahead and give this one a read. It never hurts to have read the condensed and illustrated version of the most famous works of one of the greatest authors of their time.