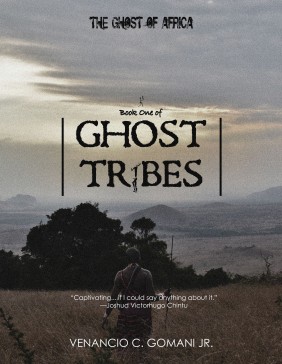 Author: Venancio Cadle Gomani Jr.
Release Date: 1st January 2019
Genre: African Fiction
Series: Ghost Tribes (Book #1)
Edition: Ebook
Pages: 199
Publisher: Venancio Gomani Books
Blurb:
In a semi-fictional verisimilitude of the continent of Africa, all the tribes are ruled by kings, smaller breakaway tribes are ruled by chiefs, and all are governed by the council of paramount—a legion of the noble tribes of the continent.
The principal story follows the tale of Likando and the war of the brother kings. Likando is the Lozi tribe’s princess, heir-elect to the throne, and the only legitimate child of the Lozi king, Simasiku Lumeta. However, growing without the presence of her mother, and her father never having told her the story of who her mother is or where she is or if she is even alive today, causes her to begin searching for the truth against her father’s permission and/or consent. She stumbles upon darker truths that result in her to learn that her birth may not have been a result of love or mere chance, but a carefully considered and planned series of events. This leads the princess into taking courses of action that bring her tribe, family, and overall kingdom to the brink of near-extinction.
The second part of the tale which begins eight years before the events of the first novel follows the story of Kaleya, the lost son of nothing who, after waking up alone in the jungle with no memory of his identity or his past prior, goes on a quest to discover the truth behind his stolen memories but entangles himself in a series of circumstances that result in him having to fight for his survival more often than not. The second part of the story simultaneously chronicles the Ghost of Africa, an enigma thought to be a demon that terrorizes tribes around a territory it claimed as its own three years before the events of the novel. Before the Ghost of Africa occupied the territory it occupies, there lived a thriving tribe with an organized structure and an army of possessed soldiers, ten thousand strong. However, when the Ghost of Africa first emerged, it led an army of exiled tribesmen-turned cannibal, who form the population referred to as the cannibals tribeless in the millions, against the growing tribe and thus, overwhelming its army and having the cannibals devour the raw flesh of the men, women, and children of the tribe. After wiping out of existence the tribe that existed in its territory prior, the demon goes on to fence that very territory with the skulls of the tribe’s populist on barbed wooden stakes in the hundreds of thousands all around that territory as a warning for anyone who ever dared to trespass.
The first book in the series, The Ghost of Africa, opens with Likando, the heir-elect to the Lozi throne, preparing for the maturity ceremony who gets ambushed by a gang of purported ‘mixed-breeds’. This series of events leads her to come face-to-face with the Ghost of Africa.

Ghost Tribes: The Ghost of Africa by Venancio Cadle Gomani Jr. is a beautiful book that is culturally so rich that it is impossible to not like it. It is an enriched and captivating tale which I thoroughly enjoyed reading.

The book opens with a bang and ends on such a high note that I was left thoroughly impressed by the author’s ability to pull off something like this, which is conceptually so heavy, with such ease and precision. The writing is commendable and I am looking forward to reading more works by the author.

The characterization could have been better, but it is one of those books in which story is the main hero and the characters come next. So overall it proved to be a pretty good read and I’d recommend it to anyone who likes reading books with more emphasis on the story than characters.