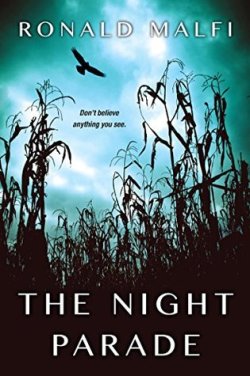 Blurb:
First the birds disappeared.
Then the insects took over.
Then the madness began . . .
They call it Wanderer’s Folly–a disease of delusions, of daydreams and nightmares. A plague threatening to wipe out the human race.
After two years of creeping decay, David Arlen woke up one morning thinking that the worst was over. By midnight, he’s bleeding and terrified, his wife is dead, and he’s on the run in a stolen car with his eight-year-old daughter, who may be the key to a cure.
Ellie is a special girl. Deep. Insightful. And she knows David is lying to her. Lying about her mother. Lying about what they’re running from. And lying about what he sees when he takes his eyes off the road . . .

The Night Parade by Ronald Malfi is a very engaging and emotional read.

Initially, after reading the first couple of pages, I felt the plot might be similar to Firestarter by Stephen King, a book I really, really loved(!) but as the plot progressed I felt reassured that this book was not entirely like it. Though the basic concept is the same – Father-daughter duo fighting and running from the world because of the daughter’s supernatural ability, this book was different in its own way. In this book, for one, the father did not possess supernatural abilities. This really made things different, though the main conflict of the father was that he did not have enough time (just like in Firestarter.) The one thing that made this book entirely different from Firestarter is the main backdrop and the central theme – The apocalypse, a world falling prey to an unidentified and seemingly incurable plague. Though I do feel that this book is kind of a homage to Mr King’s masterpiece.

The best part of the book was the conflicts, both inner and outer. I liked the characters of David and Ellie and rooted for them both till the very end. The buildup was very good and the ending was reasonable, though I did see it coming, because really, how could a book like this end? Still, I felt like I was sucker punched in the belly.

The alternating timelines added a lot to the suspense buildup and, overall I really liked this book. In spite of being almost 400 pages, it proved to be a quick read because of the high tension that was maintained throughout the book.

I’d recommend this book to every dystopian fan, though sci-fi and apocalyptic lovers might find this book a bit “low-key” as compared to the action-packed drama we normally expect from these genres.