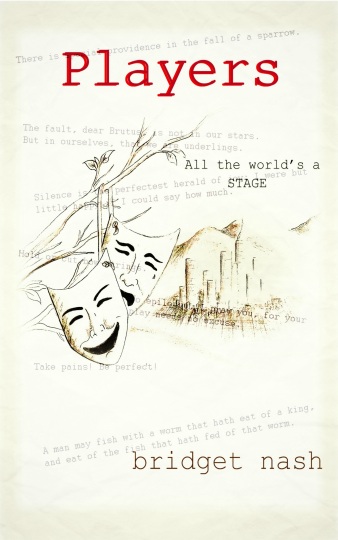 Ryan Scribe is eighteen and has it made.
He lacks nothing and doesn’t even know anyone who lacks anything.
Then he hears a beautiful actress say, “Truth is often stranger than perception,” and he begins to look at his world with new eyes.
All it takes is one wrong question and he is swiftly banished from the only home he’s ever known. Forced to join a band of traveling players, stage actors who look like they could have stepped straight out of Elizabethan England, Ryan begins to question his life, his country and everyone around him. Can he really trust a group of actors? Will his questions land him in even more danger?

Players by Bridget Nash is a unique Dystopian read with a touch of Shakespearian feel.

The plot of this book was quite unique and considerably impressive. I liked the dystopian setting, which is always the most important element in this genre, and I also liked the characters. The artistic Shakespearian touch tot he story in terms of writing as well as the concept really added a layer of positive complexity as well as a defined character to the plot.

I liked the main character of Ryan Scribe as he was very relatable and easy to like and loved reading about him and his journey. I also liked the secondary characters. but overall the story went a bit too heavy and hence I’m deduction 1/2 a star from my rating of 4 out of 5.

In spite of having liked so much, I feel that the overall story seemed a bit too heavy and hence I’m deducting 1/2 a star from my rating of 4 out of 5.

I’d recommend this book to all Dystopian lovers and the fans of Shakespearian literature.