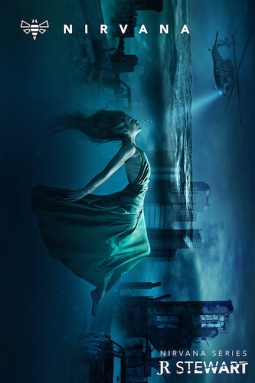 When the real world is emptied of all that you love, how can you keep yourself from dependence on the virtual?

Animal activist and punk rock star Larissa Kenders lives in a dystopian world where the real and the virtual intermingle. After the disappearance of her soulmate, Andrew, Kenders finds solace by escaping to Nirvana, a virtual world controlled by Hexagon. In Nirvana, anyone’s deepest desires may be realized – even visits with Andrew.

Although Kenders knows that this version of Andrew is virtual, when he asks for her assistance revealing Hexagon’s dark secret, she cannot help but comply. Soon after, Kenders and her closest allies find themselves in a battle with Hexagon, the very institution they have been taught to trust. After uncovering much more than she expected, Kenders’ biggest challenge is determining what is real – and what is virtual.

Nirvana is a fast-paced, page-turning young adult novel combining elements of science fiction, mystery, and romance. Part of a trilogy, this book introduces readers to a young woman who refuses to give up on the man she loves, even if it means taking oan entire government to do so.

Nirvana is an amazing YA read with a really fresh plot line and a great new dystopian world setting. I loved the characterisations and the fast pace of the story.

I was really impressed with the storyline and the world-building concept of Nirvana, though, it lacked a little behind when it came to the execution of these two concepts. I enjoyed the book (no doubt about it) but somewhere I felt that if the second half of the book can be tweaked a little bit then it can be at par with the best-selling YA reads of today.

I loved the lead character, Kenders, and was able to feel a connection with her. Though, in the second half of the book I felt that connection slipping (as soon as Serge comes into picture.) I loved Andrew, the male lead, as well but sadly the same thing  happened with him.

This book falls in the romance genre as the plot depends on the romantic relationship between Kenders and Andrew. And like any other dystopian book there is a love triangle (Kenders, Andrew and Serge) but thankfully it’s not a farfetched one. It starts and ends within an acceptable time frame and now I’m really looking forward to the next instalment of this series.

I enjoyed the easy flow of author’s style of writing. It’s simple yet relatable and makes reading this book a pleasant experience. Having said that, I’d like to point out that I felt that the first half of the book was excellent whereas the second half lagged a little behind not only in terms of the plot line but also in terms of the characterisation and flow of the story.

I started enjoying Nirvana right from the first sentence and continued to do so halfway through the book. Everything was just amazing and I had no issues with anything (but only till the first half.)

The second half of the book along with the ending felt quite weak to me. The plot went on to some other uninteresting tangent and ruined an otherwise excellent story. I really hope that the sequel will be better than this one.

The blurb is good, but I felt that it actually revealed a major spoiler about Andrew’s fake death. I would have liked it better to have come across  it while reading the book instead of the blurb.

The cover art is marvellous. I really like the eerie feeling it radiates. It’s just perfect.

Opening Line: Eight-year-old Larissa Kenders pulls a doll tighter toward her and opens one eye.

Lowlights: Second half of the book.

Final Thoughts: A decent dystopian read with a rather weak ending.