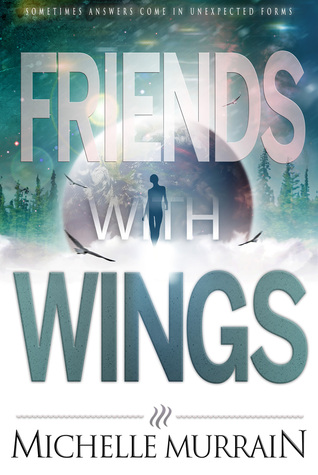 The year is 2102, the earth is in crisis, and Trina, a gutsy young woman from a poor family, is forced to sell herself into slavery to pay off her family’s debt. To her surprise, she ends up being sent into space to help colonize a star. Her future seems bright until crisis strikes the colony – leaving Trina the only human being left alive on Planet Johannes. Another spaceship is slated to arrive in a decade, but how will Trina survive alone for ten years? And even if she does, how can she keep the next colony from meeting the same fate? The answers to these questions show up in the form of “friends with wings.” Once Trina meets the Eeriv, nothing will ever be the same.

This was a fast paced novel and very enjoyable. I actually had trouble sleeping because my mind was so focused on the story and asking all the “what ifs.” The main character, Trina, comes from a poor family. Though, most of earth is poor and earth is slowly becoming all ocean. Trina’s parents die in a tragic accident and the family debt lies on Trina’s head. But instead of working hard to pay it off, the government wants the debt paid now, which forces Trina to sell her labor contract. Her contract is then sold to another company, a company that will be sending humans to other planets in hopes of helping the human species survive.

Once in space and on one of the habitable planets, something tragic happens and Trina is suddenly the only human on this alien planet, but the friendly residents that call this planet home, take Trina in and help her survive.

There is so much that I love about this book. The downfall of earth is something that we can relate to, though it is not nearly as bad as what Trina witnesses. The idea of going to an alien planet and finding a friendly species that is just as interested in humans as we would be of them. This story also gives us a little insight on how cruel humans can be. Think about it, if an alien were to land on our planet, we wouldn’t help it survive and teach it how to go on in our world. We would gut it and study it, like the savages we are.

If anything, this novel could be used to open the eyes of others.

Trina is already a strong character when we begin the story. She has to be in the world that she has been born to. But as the story progresses Trina becomes even stronger and learns to be independent. As you read, Trina goes from being a scared young girl to a very confident young woman.

There isn’t much romance, but there are many friendships and sometimes that is even better than romance. As for deaths, there is plenty of it, though not extremely graphic and you don’t linger too long on the horrible fate of some humans.

The writing I felt was well done for this story. The vocabulary does have its moments where it seems a bit extreme, but this is a somewhat scientific novel and the use of stronger vocabulary is necessary. I was a little disappointed in some cases though. There seems to be a ton of missing words that I had to fill in for myself. I feel like that the book could use at least one more, good edit.

The beginning was perfect for this book. It shows how fall the Earth has fallen and the mess that people are living in. It helps understand why Trina was so quick to agree to going into space, not that she had much of a choice.

I am so happy with the ending. I was terrified that the ending was going to mess up everything, I was waiting for it to end in disaster, but I feel that the author handled the ending very well. I feel like this book could become a series, but it is perfect as is. I love a good stand-alone novel.

The cover is very beautiful and might have a little something to do with why I chose this book to read.

The blurb feels right. It gives you just enough to want to read the story, but not enough to give it all away.

Opening Line: I am alone, and have been alone for one hundred days.

Highlights: It is a fantastical world that Trina becomes a part of.

Lowlights: Just a few editing issues that need to be looked at.

Final Thoughts: I would read this book again, just to make sure I didn’t miss anything.