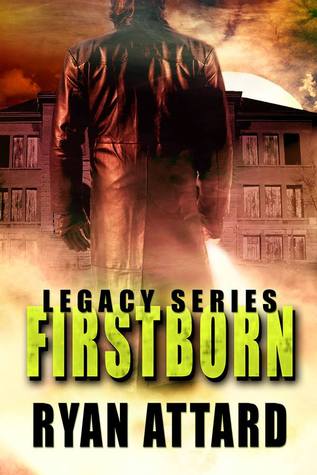 There’s a war raging between the forces of Heaven and Hell; and, as if he didn’t have enough to deal with from his own issues, his sister has chosen the wrong side. And now he’s got angels, demons, talking pets and a Japanese monster to contend with. Begin following the misadventures of Erik Ashendale in this first full length novel of “The Legacy Series.”

Firstborn did not start out very well for me. From the start it reminded me of a story that I have been reading called The Dresden Files by Jim Butcher. There are a lot of similarities to the two stories, too many to call it a coincidence. I feel like the resemblance between the two may have tainted my own views of the story.
Erik Ashendale is a wizard, who, because of a curse, can’t perform magic without a conduit. We soon find out that this wizard has a twin sister, who may or may not be evil. Either way, as most siblings, they just don’t get along.

The whole thing was all over the place. I had to keep going back to re-read parts because Erik seemed to go from one place to the next without much explanation. The beginning starts off with Erik helping the police in a situation, but the whole first and second chapter seems unnecessary. Or at least, the things that happened in the chapter seems unnecessary. There are things that we find out about the wizard in the first two chapters, but I feel there could have been a better way to expose all of this.

To be honest, I always found myself falling asleep reading most of this book. It only got better at the last two chapters, and that was the only time I found myself interested in the book.

I like the characters. Erik was hard to figure out. At moments he was like a teenager, other times he seemed more like a man in his mid to late 30’s. I spent most of the book trying to figure out how old he was, come to find out he was 23 and for some reason that just didn’t make sense to me.

My favorite character was Amaymon, the talking cat/demon. He was funny, crude, and everything you would imagine a demon being.

There wasn’t much romance and most of the kills seemed downplayed. I found it hard to see what the author was trying to explain.

The writing felt amateurish. At some points I felt like I was reading a book written by a high school student. There were a few mistakes that I picked up on throughout the book and one mistake that has my inner nerd ragging. There is a line spoken by Amaymon “Your so gay.” No, I did not use the wrong your/you’re, this was the mistake in the book. As you can imagine, it didn’t set well with me at all. I literally stared at this comment for at least 5 minutes, hoping and praying I was seeing it wrong. Of course, this is on top of the other errors throughout the book. There are missing words and extra words. I feel like the story needs a good edit.

The beginning worked for me. I was interested in the story, even with it reminding me so much of Dresden Files. But somewhere the story took a different route and I lost that interest.

The ending was fantastic. Really, I loved the aspect of Erik building his own group of magic welders to take on the evils of the world. It’s the only reason I will even consider reading the next book.

I am the kind of person that will judge a book by its cover. I can’t help it, I just love cover art. The cover art for Firstborn was simple but enough to draw me in.

I don’t think that the blurb on Goodreads really tells what the story is about. The whole heaven and hell battle doesn’t really play out until near the end of the book. I was well past the half way point before I even knew angels would have a play in the story. I felt like there were two or three storylines mixed in and played out before we got to the main story of the novel.

Opening Line: Maybe it was the black trench coat.

Highlights: The ending made me want to read the next book.

Final Thoughts: Not horrible, but not good, read at your own risk.