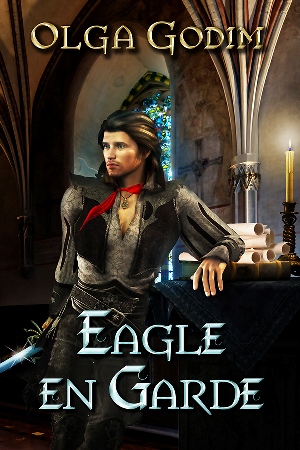 Darin, a mercenary officer, lives in Talaria, a kingdom surrounded by a magic-resistant spell. While some people wish to break the spell and invite magic back into the country, the fanatical sect of Cleaners is determined to prevent the return of magic. Darin doesn’t agree with the Cleaners’ doctrine but he doesn’t dispute it either. He is a soldier, not a philosopher. Then he accidentally overhears the Cleaners’ hidden agenda to destroy all magic workers in Talaria, including witches and elves, and his orderly life is turned upside down. His sweetheart is a witch, his daughter is a half-elf, and he has many elven friends. He can’t allow the Cleaners’ murderous scheme to succeed, can’t allow innocents to suffer from the rabid zealots. But what can a lone mercenary do against a horde of extremists? His only choice lies in trickery and deceit to outsmart his enemies. And the anti-magic spell on the border suddenly becomes his only ally.

The book starts with Captain Darin Barclay saving a women (a witch) form a bunch of cleaners in a fair in Coll, Talaria. Talaria is an imaginary kingdom whose borders are bound by a spell that prevents magic to enter inside the kingdom. Anything that has magic or anyone who can perform magic (elves and witches) can not enter the spell-bound boundaries of Talaria. Darin Barclay is a courageous 24 year old, dangerously handsome, captain of the Eagles, who has sworn to protect the people of Coll, Talaria. Cleaners are a nasty bunch of people who are against magic and all the magical people and want others to follow their Gods and believes. A few elves and witches who live in Talaria can never leave it’s borders because if they do so they’ll never be able to return because of the spell. These good-natured elves and witches are constantly haunted by the cleaners to leave Talaria.

This books takes the reader through the adventurous journey of Darin Barclay in saving elves from cleaners and in doing so, saving numerous lives, including that of his daughter Leatanis (who is half elven) and his love Ana.

Olga Godim captures the reader’s imagination effortlessly. This light-hearted story has just the perfect amount of adventure, magic, emotion, drama, morals and most of all courage. I would like to quote this book as a “no-nonsense adventure”. Right when you think something is going to go wrong with Darin’s plans, he successfully pulls off each and every plan neatly. This really made me wonder about a reader’s unnecessary need for twists and turns, just so that they have something to think about. And this is where Olga Godim, for me, has given this book a new, very positive, direction. The story runs smoothly and at a quick no-fret pace.

You can read this review on goodreads here.

Opening Line: ‘Behind a thin wooden fence, the spring fair in Coll pulsed and hummed like a human sea.’

Interview: You can read the author’s conversation with the novel’s protagonist, a mercenary officer Darin Barclay here.