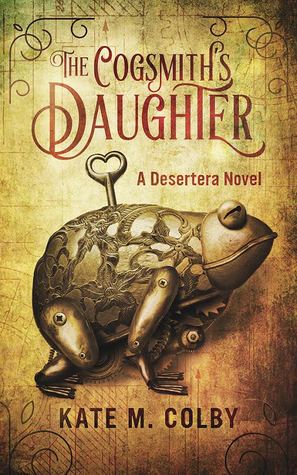 In a desert wasteland, one king rules with absolute power and unquenchable lust, until the cogsmith’s daughter risks everything for vengeance.

Two-hundred years ago, the steam-powered world experienced an apocalyptic flood. When the waters dried up, the survivors settled around their moored steamship in a wasteland they named Desertera. Believing the flood and drought were caused by a scorned goddess, the monarchs demanded execution for anyone who commits the unforgivable sin—adultery.

Today, King Archon entraps his wives in the crime of adultery, executing each boring bride to pursue his next infatuation. Most nobles overlook King Archon’s behavior, but when Lord Varick’s daughter falls victim to the king’s schemes, he vows revenge.

When Aya Cogsmith was a young girl, King Archon had her father executed for treason. Orphaned and forced to turn to prostitution for survival, Aya dreams of avenging her father’s death. When Lord Varick approaches Aya with plans for vengeance, she agrees to play the king’s seductress—even though it puts her at risk for execution.

The Cogsmith’s Daughter is the first steampunk book I’ve read in a long time, and I must say that I’m really happy that I did. This book is nothing short of a masterpiece.

The Cogsmith’s Daughter has a brilliantly written and efficiently developed plot line that is set in a mesmerizing new world. Playful yet serious at the same time, author Kate M. Colby’s writing is simply outstanding!

As soon as I started reading the first chapter, I completely lost myself in the scary, although interesting, world of Aya. I was able to relate to her on so many levels that I still feel that she’s not just a character but a friend whom I know inside out. This only proves that the characterization is beyond perfect. It’s simply magical!

I fell in love with the male lead, just as Aya did, and felt every emotion in the deepest corners of my heart. I felt sad when Aya was sad and felt happy when she found even a tiny bit of joy. Most of all, I enjoyed Aya’s thought process, and her innocence and determination made her a very compelling character.
Other characters were also crafted finely and I loved them all (even the well-crafted character of the protagonist.)

I have NO words to describe the brilliance of the worldbuilding that was executed flawlessly by the author in this book. Kudos to a job well done!

The book ended on a great note and I felt completely satisfied after finishing the book, yet at the same time, I was left craving for the next part.

I thoroughly enjoyed reading this beautiful book and I’d recommend it to all the readers who are looking for an EPIC new series to read.

Opening Line: Aya Cogsmith awoke, as she did every morning, to the croaking of the mechanical frog next to her bed.

This was her chance to reclaim her life, get back her father’s shop, and finally attain justice for his death. She was going to take it or die trying.

“You forgot, Varick. You live in an illustrious estate, have all the fruit and wine you can ingest, and receive every pampering from your staff. I live in a dirt-floored hovel, trudge miles for water, and let disgusting men penetrate me for the smallest coins in a currency. Do you really think death wouldn’t be a relief?”

Final Thoughts: A magical read that will leave you craving for more.